I am writing this article having evaluated almost all of the position groups (I am just missing DE and DT, but I feel strongly there after free agency). Free Agency had to be changed around because of a couple of things mentioning in “FA Changes” below.

Following that the article will look at FA Signings, Trades and Pick trades, ending in my Current Roster with Salary Cap.

So my first article tried to delve into working with Free Agency, and lit up a lot of things I hadn’t read into in too much detail. The main things being Kenyan Drake and Joe Thuney signing their tenders and making them more difficult to get, which resulted in a restructure of how I approach free agency. The list I used in the first article is below, with the changes highlighted red and explained underneath.

Due to the deal that saw Carson go the Texans for Hopkins I am left with John Kelly and Alex Barnes on my roster. Barnes may not be playing NFL Football in 2020 and Kelly has been a sparingly used backup so far. I have therefore added Lynch as an experienced back for short yardage situations, the locker room and as a mentor. This is a top RB Draft and I will be looking to add a couple of RBs.

The release of Hunt might come as a surprise, because it leaves me very light on the OL. Especially because the decision came after Thuney re-signed with the Patriots. Meaning that I am down a potential starting Guard and Center for 2020. However, after looking at the draft, there are enough players who I am very keen on, who could fill in from day 1. Look for my 2020 Draft to be OL heavy.

Not being able to add Drake is perhaps my biggest regret, because I have been a big fan of his since he played for the Dolphins, but the players available in the draft dampen the blow a bit.

Marshawn Lynch – after seeing what he did when he came in during the offseason 2019 I want him back. I think that will be possible for a relatively modest contract, but have gone in at the high end with a contract about as high as Dion Lewis: 1’500’000 for a 1 year deal. The idea, as mentioned above is to have him there for short yardage situations and as a mentor for the RBs as well as a good presence in the lockerroom.

PJ Walker – I was only looking for a backup and I will continue by adding an UDFA QB for competition. I like what I saw in Walker from the XFL and his cap hit is minimal.

Bruce Irvin – I like the Seahakws addition of Irvin and have proceeded by doing the same. It will be interesting to see how high his cap hit is, but in a draft devoid of pass rush talent I think it is a good, short term investment.

Michael Bennett – The first of my two pending additions. I would like to add Bennett and he said himself that he would like to finish his carreer in Seattle, but it has to be at the right price. If it is too high it is not going to work, so this situation is pending.

Jedaveon Clowney – The same goes for Clowney. I would love to add him opposite Frank Clark. With Irvin, Bennett, Jefferson, Burns and Griffin it could be an extremely dynamic and versatile pass rushing group. The cap space is there, because my offense does not have any massive earners besides the recent addition of Hopkins. In my opinion, if you are going to pay someone big money they have to be one of the best, otherwise move on, so I am happy to do that for the likes of Hopkins and Clowney. I am pending on how contract negotiations go with him, but positive we can add him to the roster.

1. N/A P Michael Dickson (from whichever team he would have landed on)

Reason: This is just a feel good decision rather than all of the more realistic ones I try to make when simulating all this. Would a trade like this ever happen? Probably not likely for a punter, but after a down year we get Michael Dickson who should have been with us from the get go and the team I trade with gets some quality players.

Reason: As far a dumb trades go this is probably up there with the best. I feel like I am giving them at least a slightly better deal, because Carson is a significant upgrade to Johnson from the Cards. You get someone who is younger and is currently a top 10 RB. Both RBs have injury concerns, but Carson less so and he carries a significantly smaller cap hit. That is also reflected in the lack of exchanging 4th rounders in 2020/2021 and me getting an extra 7th rounder. I am getting one of, if not the best WR in the NFL for my young QB. I have to add here that I am a huge fan of Carson’s running style, but he is going into his last year and has been hit by injuries again and again.

Reason: I feel like this would have been a fair trade. I have a strong safety group and can afford to get rid of McDougald to strengthen my CB position. The Redskins want to get rid of Dunbar and could get someone who would be a really strong pairing with Landon Collins.

Reason: The Jets signed Fant in real life. In this reality I decide to re-sign him and give him a shot at the starting LT spot. The Jets know that they could get one of the outstanding WRs from a very good class with their 11th overall pick and that the LTs in the 2nd round are not as pro-ready as Brown to give Darnold time to throw to their new WR1. For me it is part of my rejuvenation and getting a guy with a big contract off the payroll. Win-win.

Reason: Again, for me this is about saving money at a position where I have a lot of really good players. Carolina have lost some iconic pieces on D in the off-season and start their rebuild with Diggs to sure up the secondary.

I have gone through my evaluations of players and where I want to end up in the draft and tried to maneuver myself as best as possible with fair and realistic trades. The reason why I have simulated these in advance is because you never find out which trades were offered and not in real life, these ones could happen.

Altogether I am not really a big fan of 1st round players which is why getting out of the 1.4 spot was essential for me. The only player worth picking up there was Chase Young, but I have a pretty strong DE group and the furthest I see him falling is 3rd.

Here are my trade downs and why that team might want to trade up:

This section will give a brief overview of where my roster stands before the draft as well as the salary cap associated with it.

This is a table, which will show you what the different colours signify that the names are highlighted in.

Ok, so upon looking through the roster there are a couple of things which should become aparent: 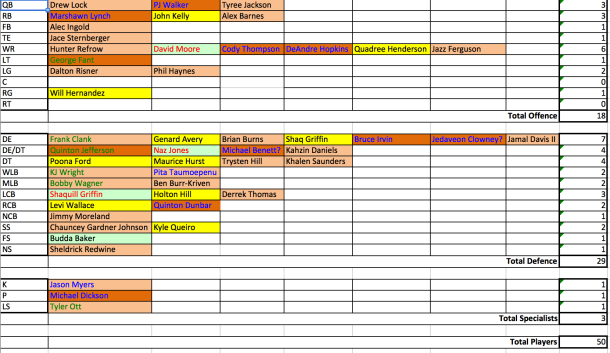 As you can see above, there are questionmarks behind Bennett’s and Clowney’s names, because their inclusion depends on where they end up falling salary wise. In the next section I have, however, included a generous cap allocation for each one, as well as for Irvin whose cap hit has not yet been publicised. These limits should not be met.

As you can also see below, there are 6 players who have ??? allocated to their name. The names below correspond to the players above, so you can find out the names easily for yourself as well as seeing who has what cap hit. The reason for the questionmarks is that they are all currently Free Agents and may not make my roster for 2020.

In a similar note I have to talk about squad size, currently I have 50 players. Naturally that does not mean that I will only draft 3 more. For one, as mentioned above, 6 players may not even be on a team in 2020 and therefore probably not on mine. Secondly, I will be doing roster cuts just like any other team and can therefore carry up to 90 players until that time. Thridly, I also have my 10 person Practice Squad.

There are a couple more things I want to point out regarding the numbers. In 2020 the Seahawks will have a Dead Cap hit of 2’000’000. Due to the fact that I have made many different changes to them I have increased my Dead Cap hit to what I deem a safe and fair amount at around 10’000’000.

The next thing I want to look at is IR and PUP, both of which come under Injured Reserve in my table above. Basically this is two things. First of all it is a portion of my salary cap set aside in case of injuries to get a suitable replacement(s). Secondly, and I make this point because I have set a significat amount, this is a buffer for extra costs which may arise until the season starts.

You will also notice that I have set aside 20’000’000 for Draft Contracts. As you can see by my picks above I have quite a few, and when you include the UDFA I think this is a fair and safe amount to calculate, although I think it will fall more in the ballpark of around 16’000’000. I don’t know if things have changed under the new CBA, but as far as I know only the top 51 contracts count towards the salary cap prior to the start of the season.

The last two numbers I want to talk about are the 0 for Practice Squad and the roughly 11’000’000 in Available Space. Those two pretty much corralate. Altogether I have calculated everything over a little so that if I need to make any moves in FA after the draft I still have some money!

In my next posts I will look at the different position groups in the Draft and then a summary of who I plan to draft and when.